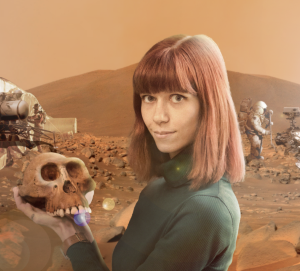 Savannah Mandel is an anthropologist who researches all things speculative, futuristic, and intergalactic. If she has a pen in one hand and a cup of coffee in the other then you’ve found her in her happy place. She is currently a PhD (and MA) Candidate in Science, Technology and Society at Virginia Tech, holds a MS in Social Anthropology from University College London, and a BA in Anthropology from the University of Florida. She has conducted ethnographic fieldwork at Spaceport America, worked for the Commercial Spaceflight Industry, and was named a “Rising Star” by Ozy Magazine in 2019. She is the Lead Human Space Advisor for Humanity in Deep Space, has consulted with the Interplanetary Agricultural Lab, and is a Project Advisor for The Golden Record (.org).

View all of Savannah's posts on Platypus, The CASTAC Blog.

All These Worlds Are Yours Except Europa: Building Colonies without Colonization

Beneath Europa’s frozen surface is an ocean thought to contain twice as much water than that on Earth (Planetary Science Communications Team 2021). Above its surface, temperatures are lethal, ranging from -210 degrees Fahrenheit to -370 degrees Fahrenheit (Planetary Science Communications Team 2021). This is the same moon of Jupiter which harbored indigenous life in Robinson’s 2312 (and was protected because of it) (2012). The same moon that Russian cosmonauts were warned to avoid in Clarke’s 2010: Odyssey Two (1982) due to its geologically unstable nature (fig. 1). The moon named after a Phonecian Princess, who was made the first Queen of Crete after she was abducted and raped by Zeus. (more…) (read more...)

Ghosts in the Machine: On losing control to the technoscape

“There have always been ghosts in the machine. Random segments of code that have grouped together to form un-expected protocols. Unanticipated, these free radicals engender questions of free will, creativity, and even the nature of what we may call the soul. Why is it, when some robots are left in darkness they will seek out the light? Why is it that when robots are grouped in an empty space they will stand together, rather than alone?” For now, sentient robotics do not exist. But don’t let that undermine the relevance of Dr. Alfred Lanning’s speech in the 2004 science fiction movie I, Robot, or diminish its potential significance for the anthropology of technology. As I begin a new field research project with Spaceport America, studying the future of human space exploration, I find myself re-considering human interactions with technology and technoscapes: not only in the sense of how we interact (read more...)