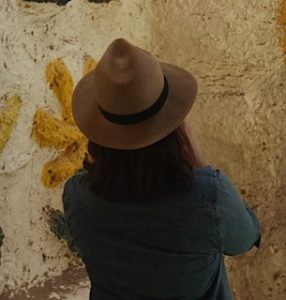 I am an ethnographer and environmental social science scholar/practitioner, currently based in Washington, D.C. as a AAAS Science & Technology Policy Fellow with the National Park Service. I received my PhD in Anthropology from the University of California, Irvine, where I specialized in environmental anthropology and science and technology studies. My research explores the ecological politics of the arid West from an ethnographic and historical perspective, with a focus on water scarcity, climate change, and environmental temporalities.

View all of Emily's posts on Platypus, The CASTAC Blog.

Local Power: The Politics of Renewables in California

“This is something you won’t find written down,” says George, watching intently for my reaction. “But it’s been agreed upon at the highest level of government—the highest level—that the California desert is designated as a sacrifice zone. We are worth sacrificing.” He holds my gaze, making sure I take down what he says word for word. George speaks with confidence and ease, a natural choice for the face of his neighborhood conservation group. “I’ve done the calculations. More renewable energy is available from rooftop solar in San Diego and Los Angeles Counties than will be derived from the large-scale generating facilities on two million acres of desert habitat called for in the Desert Renewable Energy Plan. It doesn’t make sense! But they don’t care, because they’ve decided that we’re a sacrifice zone.” (more…) (read more...)

Does e-Waste Die? Peter Little on Lifecycles and Makerspaces in an “Electronics Graveyard”

Peter Little is an anthropologist and assistant professor at Rhode Island College, and author of Toxic Town: IBM, Pollution, and Industrial Risks (NYU Press 2014). I asked him a few questions about his new project on electronic waste recycling in Ghana. His answers touch on the politics of electronics waste and pollution, surprising links between first and second projects, and the challenge of doing fieldwork in a place that everyone’s talking about. Our conversation below has been edited for length and clarity. Emily Brooks: What was the genesis of your second project? How did you move from Endicott to Ghana? Peter Little: The original project was on a high tech production site, a birthplace of electronics. That led me in to thinking more about the lifecycle of electronics, from production to discard. When we think of electronic waste, China pops up, of course, but more and more, I started to notice West (read more...)

SOS! Save Our Sea! California’s Salton Sea demands action, but what kind?

This March, California’s State Water Resources Control Board called for a public workshop to re-evaluate the state of the Salton Sea, a complex and notoriously disastrous salt lake in the southeastern California desert. Nearly 200 people responded to the call, crowding in to a hearing room in downtown Sacramento to give testimony on mitigation and restoration projects, consider drought impacts, argue for the Sea’s environmental and economic value, and discuss the enormous water transfer agreements that threaten to damage it even more. Attempts to define the problem and its stakes have gone on for decades, but it is still far from clear whose fault is it that the Sea is still shrinking, still dying, or still dangerous, or, for that matter, if anyone can (or should) keep trying to fix it. As a semi-permanent disaster landscape, the Salton Sea is best defined not by the fall-out from a singular event (read more...)